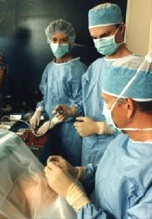 Dr. Chad Reder, left, and Dr. Frederick Richburg are a part of Mission Cataract USA, a nationwide nonprofit organization that provides free cataract surgery to those who don't have insurance or can't afford to pay.

"I was invited by a group that flies to Mexico to do free cataract surgery and I started thinking, 'Why can't we do people right here?' " says Richburg, who retired in 2004 from private practice and as Valley Eye Institute's medical director.

Sixteen years later, 9,200 surgeries have been performed in 36 states by Mission Cataract USA, a nonprofit organization where eye doctors, nurses and other staff volunteer their services; supplies are donated. The surgeries are for those who have no way to pay, including access to private health insurance, Medicare or Medi-Cal.

"The original idea was to have all the surgeries on the same day," says Sheree Petree, who helped Richburg launch Mission Cataract USA and is its executive director. "But the practices do it when it suits their schedule."

Richburg, medical director at Valley Eye Institute from 1981-2004, says the idea was for doctors to do the surgeries at their own centers. Richburg performed Mission Cataract USA surgeries from 1991 to 2002.

In 1991, all 21 surgeries were done at the Valley Eye Institute. The following year, 50 surgeries were performed at six centers throughout the state.

According to Mission Cataract USA's Web site, a cataract is the clouding of the lens in the eye and is part of the aging process; other causes include birth defects, injuries or infection. About 15 million people worldwide are blinded by cataracts.

Petree says a typical cataract surgery takes 20 to 30 minutes and has a 95% success rate. Prospective Mission Cataract USA patients usually are screened the week before surgery; free follow-ups are done with an optometrist.

"On the day of the surgery they go home with a patch on their eye," Petree says. "They come back and the doctor removes the patch and they can see. It's a very emotional day when the patch comes off."

Chad Reder, medical director at Valley Eye Institute since June 2004, is preparing for his third year performing surgeries for Mission Cataract USA; he estimates he's done 12 to 15 over the past two years. He says the cost of surgery varies but averages about $5,000.

"We're trying to do it for people where it's going to make a difference," Reder says of Mission Cataract USA. "We want to reach out to that population where the cracks are too large and they've fallen through."

A truck driver who had been out of work for months is back on the road. A retired man resumes his favorite hobby, building model railroads. And an unemployed carpenter returns to his job.

Office Park Eye Center is currently the only Mission Cataract USA participant in the state of North Carolina.

The visual symptoms can vary. Blurriness, hazy vision, or increased glare from sunlight and headlights may be present...

Your eyes are one of the single most important parts of your body...

4 Signs You May Need Cataract Removal

Cataracts are one of the most common types of vision issues.

The Facts About Cataracts

Treatment options really come down to one thing – corrective surgery.

What Should You Do If You Have Cataracts?

Consider taking advantage of free clinics or treatment days that are offered by organizations.

Do You Have Cataracts?

One of the most common problems, affecting an estimated 20 million people at any given time in the country, is cataracts.

Are You A Good Candidate For Cataract Surgery?

As we age, our body goes through a number of changes and challenges

How To Get Free Cataract Surgery

The Importance For Doctors To Give Back

Today, with all the attention placed on health care reform and insurance laws, it’s easy to lose sight of one important thing

What To Expect After Cataract Surgery

There are a few key things to understand regarding the recovery from cataract surgery.

The Benefits of Improving Your Understanding of Cataract Surgery

While it’s still hotly debated, the simple fact is that the Affordable Care Act has given many people insurance that just didn’t have it before.

Mission Cataract USA doctors give the Gift of Sight for Christmas

What To Expect After Cataract Surgery

Cataract Surgery can be intimidating, not only the surgery itself but what comes after.

Mission Cataract USA has centered its focus on existing and current patient testimonials. We have always dedicated our non-profit towards the well-being of our patients.